As a social entrepreneur, Saul Alinsky put himself at the center of much of the action of the organizations he helped build.  He reveled in his growing prominence and the apprehension he inspired when he was invited into a community to begin work.  Alinsky crafted his public persona to serve his growing notoriety, which in turn increased his capacity to raise funds and gain the early respect of what he called the "have nots" in many communities around the country. 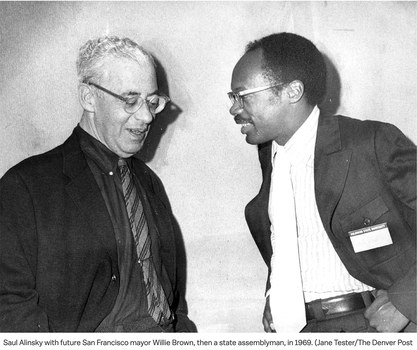 The generation of organizers inspired by Alinsky and informed by his organizational genius adopted a different way of doing business.   The emerging standard for IAF practice seeks to minimize the public role of paid organizers, relying instead on community leaders and volunteers to speak for themselves and their own organizations.  Unlike Alinsky, these organizers function deliberately behind the scenes, viewing their role as teaching public skills and stirring latent hopes for change.
The succeeding generation of talented organizers expanded the range and reach of modern IAF broad based organizations and took the work in fresh directions.  This generation, now transitioned out, includes Ernesto Cortes, Jr. and Michael Gecan - past Co-Directors of IAF - and Arnold Graf and Sr. Christine Stephens (now deceased). Their groundbreaking achievements in the field endure.
2020-21: Martin Trimble and Joe Rubio stepped up as IAF's new Co-Directors.  They face enormous challenges in an era of embedded technologies, deep polarization and Covid infected relationships.  Inevitably their performance will be compared with their predecessors whose track records of building organizations from scratch and recruiting and training organizers set a high bar.